As I was searching for things to make for my next baking adventure I thought about things that my family enjoyed to eat often and what came to mind was cinnamon toast. It is made most days in our house. So I searched around for a recipe that seemed slightly challenging, but again not too complicated (I hate buying a big bag of some ingredient only to use a small amount in one recipe – it feels so wasteful). I landed on a recipe for Cinnamon Swirl bread from the Pioneer Woman. I had all the ingredients for it at my house and although the time seemed really long for proofing times, it felt like something that I could easily whip up during a week day – pacing out the hands on work times during the mythical “nap times” and proofing times during my kids awake times. It seemed like a perfect plan….

Turns out that this simple recipe was much harder than I anticipated it would be for me to master.

The first attempt was a dud to say the least. I am 100% sure that in an effort to accomplish this recipe – I rushed the very important step of letting the milk and butter cool down before adding the yeast and I for sure killed it all. There was a very little rise after the first proof and almost none after the second, but I had let it go for 2 hours each (and that is what the recipe said) and decided to just bake it anyway and see what happened. It wasn’t good.

It was tight, chewy and the filling flowed out like a river. My husband described the first version as, “very dense dough with delicious caramel running out of it”. It sucked to fail at that recipe!

Therefore, I put on my big girl pants and decided to try again. Round #2. I was determined to do a better job. I pulled out my thermometer and made sure that the butter and milk was between 100 – 110 degrees before I sprinkled the yeast into it. I also again stuck with the proofing times of two hours each. I majorly over proofed my dough the first time!

This is what the dough looked like after I pulled it out of my oven (which I had heated to 140 degrees and turned off). It was a raised dome of dough and as soon as it hit the counter it deflated to this! I thought that part of my problem last time was that I had rolled the dough too tight and so this time I decided to split the roll down the middle and braid the two open sides of the roll so that the filling was all exposed and the dough had more room to grow and open up. Unfortunately, I didn’t trust the cooking time and decided that the whole loaf needed to be set before I pulled it out of oven and MAJORLY over baked it! I gave some my to my neighbor who said, “Well it rose better, but it wasn’t exactly enjoyable to eat”.

I knew at this point that I needed to make some changes for my next round.

Try #3 – I wised up and ended up just microwaving the milk and butter for 30 seconds each instead of cooking it on the stove. I checked the temp after mixing them and it was right at 103 degrees and sprinkled the yeast on top. After waiting the allotted 10 minutes. I came back to this massive yeast bloom and knew that I was headed in the right direction.

While the yeast was blooming, I heated the oven again to 140 degrees and then turned it off and left it closed while I mixed the dough. I whipped the eggs and sugar together until they were light and fluffy. I also added some vanilla bean paste for extra flavor. Then I mixed in the milk, butter and yeast mixture. Next I added half the flour and all of salt to the mixture until incorporated. Then I mixed in the rest of the flour. 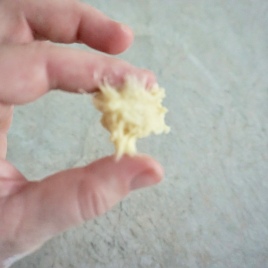 Once the dough was at the correct consistency, I put it in an oiled bowl and covered it with plastic wrap. I put the bowl in the oven to proof.

Here is where my love of the Great British Baking Show proved to be really helpful!

I was watching it the other day and they were talking about how enriched dough (dough was added sugar and fat aka the type of dough I was making) took longer to proof in the proofing drawer, like 30 minutes….30 MINUTES – I for sure didn’t need to let my dough proof for 2 hours, since I basically created a proofing drawer with my oven. This time I let it proof for 45 minutes and had amazing results. 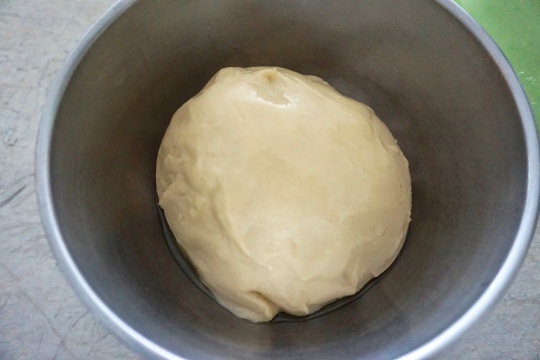 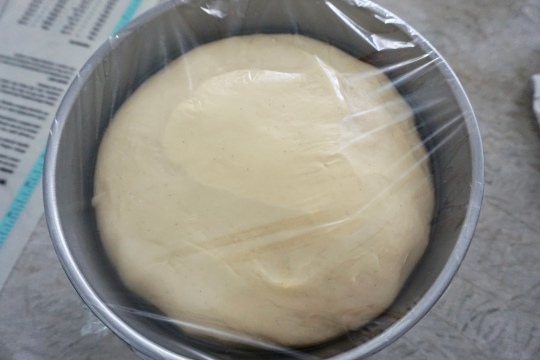 I turned the dough out onto my pastry mat that I floured and rolled it 24 inches long and as wide as my pan was that I was baking it in (about 9 inches). Then I rubbed room temperature butter all over the dough and sprinkled it with a combination of sugar, brown sugar and cinnamon. 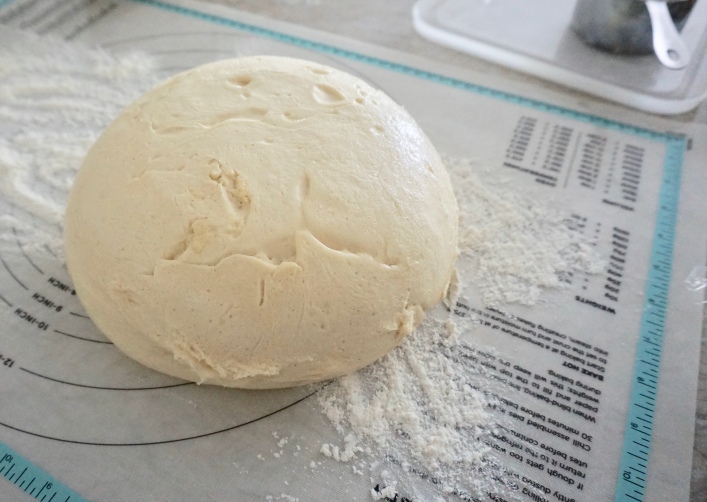 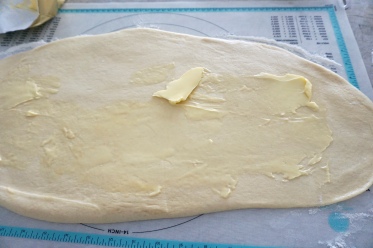 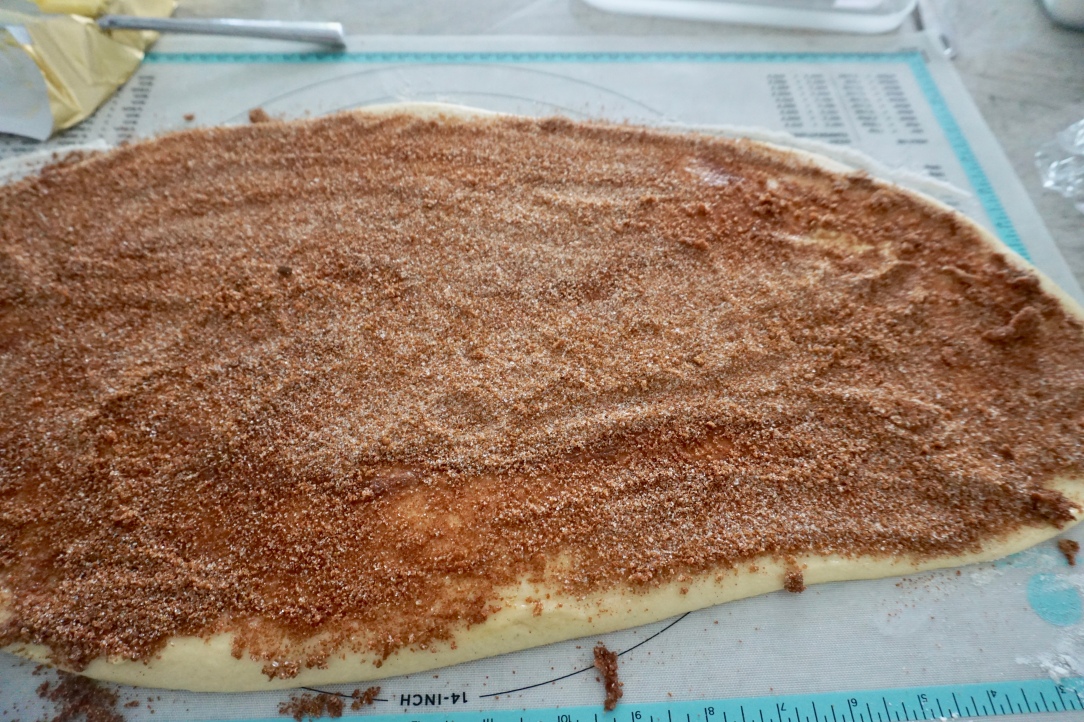 Next, I rolled the dough, starting at the 9 inch end. Then I pinched it closed on the seam. I sliced the dough through the middle the length of the roll and braided it all together. Finally I put it in the buttered loaf pan and covered it with plastic wrap to raise again. This time I only left it to raise for 30 minutes. 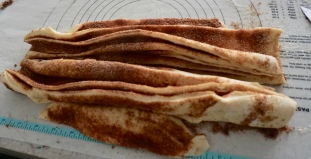 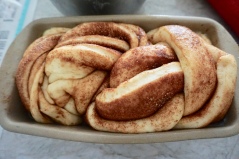 After the second proof I pulled it out of the oven and turned the oven on to 350 degrees. Once the oven came to temperature, I put the loaf back in to cook for 45 minutes. I came back to the oven to check on it half way through the cooking time and was SHOCKED by how enormous it had grown. I let if finish cooking and let it cool for 15 minutes before turning it out of the pan.

This loaf finally tasted great! It was tender and moist, it just looked terrible! Everyone gave it rave reviews. I really thought about calling it quits and not making a 4th batch…but I couldn’t get over how ugly it really looked.

Soooooo….today my son asked for cinnamon bread and I decided I could make just one more batch. For attempt #4 – I followed all the same steps as #3 except for one change. I rolled the dough out to 24 inches long and 14ish inches wide. Then I cut the dough in half length wise and went to cover it with cinnamon and sugar and realize that I used all my cinnamon on the last loaf. So I covered one half of the dough with brown sugar and pumpkin pie spice and the other half with sugar and mini chocolate chips. I rolled the doughs up, sliced them, braided them, and then put them each in a loaf pan. I let them proof for 30 minutes. Baked them at 350 for 45 minutes (I should have pulled them at 40). Let them cool and sliced into them. I then sent all my friends who had been cheering me on in the adventure a text that said, “I can finally stop making this bread – it looks good and it tastes good” 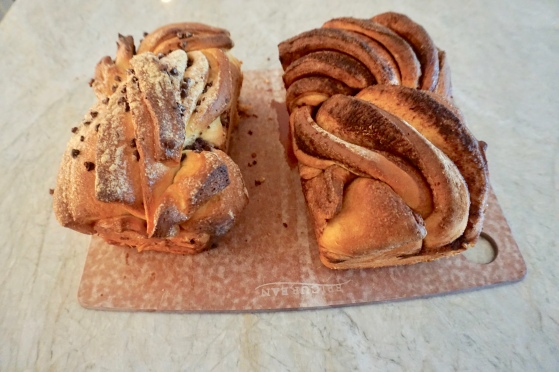 So technically my final loaves were not cinnamon swirl bread, but they were very tasty!

Cinnamon Swirl (Or other filling of choice) Bread

Recipe Inspired by the Pioneer Woman

4 thoughts on “Perseverance and the Cinnamon Swirl Bread”

Check out the blog today for my favorite Challah recipe- my college roommate taught me how to make this our junior year of school and it is the best! The recipe is easy and the shaping couldn’t not be simpler. Bake and enjoy!! #challah #challahbread #yeast #yeastedbread #bakingbread #emoryuniversityclassof2007
So I don’t know if you have ever had a Grapefruit and Cardamom Sweet Roll before but you seriously need to make these as soon as possible! The dough is soft and tender, the filling is zesty and sweet with a caramelized crunchy top and syrupy bottom and then it is topped with a delicious cream cheese icing. Thank you @shaye.byers for pushing me to this flavor combo! @sallysbakeblog @whiskkid @thekitchn #grapefruit #cardamom #sweetrolls #wintercitrus #grapefruitcardamom #sogladthisyeastworked
Take advantage of this amazing winter citrus season with this bright lemon tart recipe up on the blog right now! 🍋🍋🍋Click on the link in my profile to visit www.allieandtheoven.com to find the recipe and step by step instructions. @testkitchen #lemon #tart #citrus #meyerlemon #brightcitrus #nosoggybottoms #winterbaking
The blog is back! Sorry for the long wait but these welcome back muffins are up on the blog today! The muffins are buttery, fluffy, easy to make and full of delicious mini chocolate chips to brighten your mornings this January! @cleobuttera #chocolatechipmuffins @breakfasttreats #nomoresicknessinourhouseplease
This caramel candy recipe is from @marthastewart and it never fails! All you need is simple ingredients, a VERY large pot and some time. I always top my tray with flakey salt before it cures for 8 hours. Then I cut it up and wrap it in wax paper and put it on cookie trays. It is a delicious cookie alternative! #caramelcandy #holidaybaking #childfreetimeneededforthisone Google Martha Stewart caramel candy for the recipe
This is going to be something magical! Any guesses??? #stillmakingholidaytreats
Another batch of dough getting ready for the freezer. This round is salted butter chocolate chunk shortbread! #holidayprep #holidaybaking #freezercookiedoughisawayoflife
When the request for cheesecake comes in for Friendsgiving you deliver! Pumpkin cheesecake with ginger snap crust and vanilla cheesecake with brownie pieces and chocolate cookie crust- hope they taste delicious! @emmyg2012
Are you getting a head start on your holiday baking yet? If not, you need to bake this pecan pie this weekend and freeze it for Thanksgiving! Not to mention this this is BOURBON PECAN PIE! Your family will be thankful for you this year when you serve this pie. #thanksgiving #holidaybaking #bakenowandfreeze #pecanpie #pecan #bourbon #bourbonpecanpie @smittenkitchen @preppykitchen #pie