After we got home from Napa I thought about what I wanted to make first from all the yummy treats we tried. I was asking Kevin what we should do and without skipping a beat he goes, “ENGLISH MUFFINS!!” He really, really liked the english muffins we had at Model Bakery. Pretty sure that in the 5 days we were there he at at least 3 of them. So I looked around for a recipe that seemed like it made the most sense to me and had the easies steps to follow. I landed on a recipe from King Arthur Flour and added the ingredients I needed to our weekend shopping trip. I may or may not have also made Kevin watch the episode of Great British Baking with me again where they make english muffins – I can’t help it! I love the show so much!! I pulled some tricks that I had learned from previous bakes to help with this one and a few things from the episode to make these english muffins easier.

As I was getting ready to start, Kevin asked me what recipe I was using, when I told him that I picked the King Arthur Flour one, he immediately looked up a recipe from Model Bakery and couldn’t believe that I had picked a different one. He also decided to have a bake off with me – but I’ll let you know who won later… 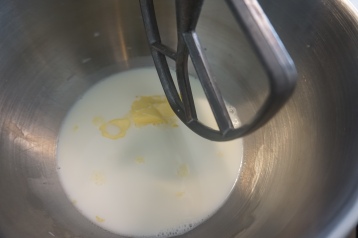 While I was mixing this dough, my Mix Master tried to walk off the counter and take a dive to the hardwood floors below. Luckily I caught it in one hand while holding my youngest son in the other had (it was a close call). I was thinking how lucky I was when all of the sudden, my bowl popped out of it holding spot and almost flew off the mixer. Again, luckily I was nearby when it  popped out and was able to turn the machine off and retighten the clip at the back of the machine and it began to work again nicely. (I may cry if my Mix Master does actually decide not to work anymore).

After the dough came to the right consistency I scraped it onto my dough mat (which I LOVE by the way) and and worked it a few times with my hands to form it into a nice round ball. Then I oiled the mixing bowl with some grape seed oil and put the dough back into it and topped it with plastic wrap. Before I opened the oven, I turned the heat off of the stove and grabbed a cake pan. I opened the oven door and slid the cake pan on the bottom shelf of the oven, and poured the boiling water into the cake pan. Then I put the dough on the top shelf and closed the oven door quickly to trap in the heat and steam to make the oven a much like a proofing drawer as possible. I waited for the dough to double in size. With the great conditions in the oven it took only 30 minutes, not the 2 hours that the recipe suggested.

I dumped the risen dough out onto my dough mat and rolled it out until it was about a half inch thick. Then I cut 15 english muffins out with a 3 inch circle cutter. (Unfortunately, I did not get pictures of this step…oops). I covered the griddle with a generous amount of semolina flour and put the muffins on it. Then I covered them with a sprinkle of semolina flour and plastic wrap. Then I put them back in the oven for a second proof, this one was only 20 minutes.

While I waited for them to proof, I did a test cook of a sample english muffin from the extra scraps in skillet with the same generous amount of semolina that I had on the griddle. Within a few minutes of cooking, the semolina was burning faster than the muffins were cooking. I realized that I had a problem and didn’t know what I was going to do about all the extra semolina I had on the griddle. The reason that I put them on the griddle to rise, is because it is easiest to keep their shape by without having to move them after the second rise. So….since I didn’t want to mess up their shape by moving them to get all the extra semolina off, I eventually settled on vacuuming it off with the crevice attachment of our vacuum (this is totally not a good idea – one of my english muffins also may or may not have spent a second in the vacuum – can you guess which one it is in the picture to the right?) 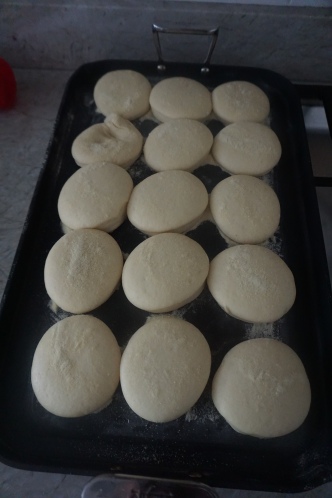 I turned the stove onto medium low. I feel like medium low is such a hard temp to describe, but I basically turned it all the way down and then bumped it up only a smidge. I was amazed how quickly the bottoms started to crisp up and the english muffins rose so nicely under the gentle heat. I checked the bottoms frequently and ended up cooking most of them about 7 minutes on the first side and then 5 on the second side. I checked the temperature in the middle of several english muffins to make sure they reached 200 degrees. I then turned the stove off and put the english muffins on a cooling rack.

As you can see, all of the english muffins are slightly different colors on the bottoms but, they are all delicious!

2 thoughts on “Do you bake english muffins?”

Another day…another loaf of sourdough bread - I hope you are all doing well and enjoying something tasty and homemade tonight. @kingarthurbaking
Happy 4th of July!
Hello Friends! I hope you are excited and ready for springtime! We are more than ready around here and this @luckycharms St. Patrick’s Day Mix is one of our go to favorites. It is bright and colorful, sweet, salty and oh so very easy! I hope you enjoy! The recipe is up on the blog today. #longtimenopost #spring #springbaking #stpatricksday #rainbowsaremagical
Pecan Pie Bars are the perfect dessert to bridge the gap between Thanksgiving and Christmas. The filling is gooey and delicious the pecans are toasted and crunchy and the soft crust rounds out the whole tasty experience. I combined two recipes to make these and you need to run to the blog to find the recipe and make these today! #pecanpie #pecanpiebars #holidaybaking #bakingmakesmehappy @smittenkitchen @kingarthurbaking
Pumpkin Brown Butter Whiskey Cake recipe is up on the blog. This is going to be your go to Friendsgiving or non-traditional Thanksgiving dessert this year! The cake is tender, the cream is rich, the gingersnaps are crunchy and the flavor is very bourbon/whiskey forward - you will love it! @eater #thanksgiving #pumpkinbaking #fallbaking #whippingcream #gingersnaps #adultdesserts #bourbobmakesitbetter
New Recipe on the blog!! Pumpkin Pie Bars- this is a great recipe to dip your toes into holiday baking without having to dive head first into pie season! These yummy bars taste just like pumpkin pie with a few twists and much less stress. I hope you give them a try. #fallbaking #pumpkin #pumpkinpie #oats #nutfree #nutfreebaking #sweaterweather #holidaysarecoming #creamcheesemakespumpkinbetter @tasteofhome @lizkuster27
These homemade doughnuts and doughnut holes were a new baking adventure for me to make but for a first attempt at doughnuts I am so proud of how they turned out. Check out the new post if you are looking for a new challenge and some flavor options for glazing these doughnuts. So glad to have this recipe finally published. Happy almost Friday! #doughnuts🍩 #doughnutholes #donuts🍩 #donutholes🍩 #mapleglaze #vanillabeanglaze #cinnamonsugardonuts #yeasteddough #enricheddough #breakfasttreats #fallbaking #firsttimefryer
Super Simple Shortbread Cookie recipe up on the blog today! If you like a crispy edged, a soft centered, buttery cookie with a nice salt finish then this is your cookie! Head over to www.allieandtheoven.com to check out the recipe and whip up a batch for the weekend.
Get ready to dip your toes into fall with this salted caramel popcorn! It is perfect for this kind of summer - kind of fall weather we are having right now. This recipe only takes a few ingredients and by baking it after you pour the caramel on the popcorn it makes sure each piece is coated perfectly. I made this popcorn for a concert with friends and we were passing it out to our neighbors around us to share because it was so yummy! I hope you make this easy, crowd pleasing, gluten free recipe soon! @cookiesandcups #popcorn #glutenfree #caramel #caramelcorn #fall #fallbaking #thisrecipeismadetobesharedwithfriends
Join 142 other followers