Last week my husband and I had the amazing luxury of being able to take a trip to Napa for a few days. My in-laws came and stayed with our boys. Happy to report back that everyone survived! While I was there, I tried to take lots of pictures of all the “research” I was doing for the blog while we were there. This of course meant that we needed to try as many treats as we could in Napa. There may or many not have been a direct correlation between forgetting to take pictures of the treats and how many wineries we visited earlier in the day!

Here is a quick recap of the week in treats: 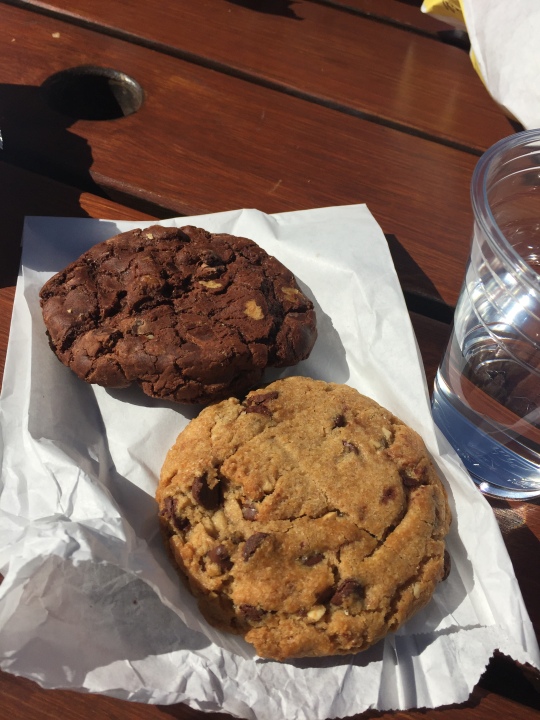 On our way to our hotel we stopped at the Oxbow Market in Napa and waited in line for breakfast sandwiches at Model Bakery. We also picked up some cookies and a loaf of sourdough bread while we were there. The bakery is know for their english muffins and they did not disappoint! The sourdough bread was also super tasty – it was great to use for snacks during the week. The cookies we picked were the Chocolate Chip Peanut Butter cookie and the Chocolate Rad. The Chocolate Rad was my favorite between the two.

The next morning we went to Bouchon Bakery in Yountville, where we stayed. If you have never been to Yountville before you MUST go!! The whole town is about 1 mile long and filled with the best tastes and smells ever! Everything is delicious in the whole town. 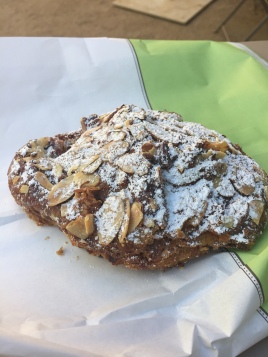 This was again another time where we waited in line to order – but it was soooo worth it! The selection was amazing and made it hard to choose! Kevin went for an almond croissant and I chose the coffee cake. I didn’t realize until I dug in that there was a ribbon of dark chocolate running through the middle of the coffee cake! Yum! We bought another loaf of bread, this time a seeded wreath. It was delicious with a rich nutty flavor and crunch texture. We also picked up a salted caramel macaron and a TKO cookie. The macaron was larger than I was used to which made it nice to share since it was very rich and tasty. The TKO was similar to an Oreo in that it had a crumbly chocolate cookie on each side with a white chocolate ganache cream inside. Both were yummy treats to enjoy during the day. My sister Amy told me that we missed out on not ordering the Oh-Oh though, think of a deluxe Ho-Ho… I guess we will just have to go back to get that next time!

This breakfast risotto with strawberries and mint is one of the BEST things I have ever enjoyed. Four years before this trip, we actually went and stayed at Hotel Yountville for our honeymoon. So when we went back this time, we decided to stay at the same hotel. I figured it was a long shot that they would have this breakfast risotto still on the menu and was soooo excited when I saw it still listed. It has a strong vanilla flavor and is thick and creamy. I’m sure it is made with pure heavy cream. The risotto is almost a rice pudding consistency that is cut though with the fresh sweet strawberries. There is also a drizzle of freshly made strawberry syrup, fresh mint and lemon zest. All topped with slightly crunchy coconut! OH MY WORD THIS IS SO GOOD! 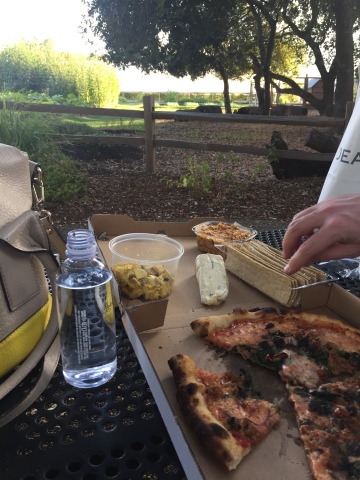 On our last night in Napa we stopped by Dean and DeLuca in St. Helena and then popped into Redd Pizza for a take away pizza. We ended up walking back towards our hotel and decided to stop and eat our picnic dinner by the gardens of the French Laundry. This was kind of symbolic for us because the French Laundry actually called us on Sunday after we arrived and offered us a table for our last night. We had tried to make a reservation earlier but they were all full so we were on the wait list. We seriously talked about going or not going for over 30 minutes. In the end we decided to decline the reservation because we did not end up packing the correct clothes and knew that we had already booked and confirmed a pretty expensive week of experiences. I guess the French Laundry will just have to wait until our next trip out west.

Back the treats though….one of the things we picked up from Dean and DeLuca was this chocolate babka. I was super excited to try it, especially after all the cinnamon swirl bread I had made the week before. This was totally a different beast than what I had made. It was denser, richer, chocolatier, and just super, super fantastic. I’m totally not signing up to try to make this anytime soon, because – lets be honest – my pants are even madder at me now than they were before Napa!